We seem to be in the season of Dr. Leopold Weiss, with the recent discovery of a family Bible and other revelations about the estranged brother Houdini called "Doc." So today I thought I'd share this article from The Bridgeport Telegram dated November 16, 1926, just a few weeks after Houdini's death.

As we know, Houdini and Leopold had a falling out when Leo married Sadie Glantz, the Hungarian ex-wife of another brother, Nathan. The precise details of the family drama are not entirely known, but Houdini's displeasure took many forms, including cutting Leo's head out of family portraits and forbidding his burial in the Weiss family plot.

Even after death, Houdini struck, as this article records. Houdini's Will stipulated that the dreaded Sadie, and by extension, Leo, would receive nothing from his estate. Ironically, Leo's own estate at this time may have been larger than Houdini's, which was ultimately declared insolvent.

Leo's life did not play out so well after Houdini's death. A census taken in 1935 shows him still married to Sadie; but at some point, she vanishes from his life, either by death or divorce. Leo retired from his lucrative practice as a radiologist in 1949 due to increasing blindness (some say caused by repeated X-ray exposure). In 1962 he committed suicide by leaping from the roof of his apartment building in the Inwood area of Manhattan.

Leo left all his worldly goods to his long-time former nurse, Marguerite Elliott. But Marguerite's husband forbid her from accepting, so all that was left of the last living Weiss sibling was thrown out.

But Leo scored one victory in the end. Even though Houdini had excommunicated him, he was buried in the family plot in Machpelah cemetery, though today his gave is unmarked due to vandalism. Whatever happened to Sadie in life or death is unknown. 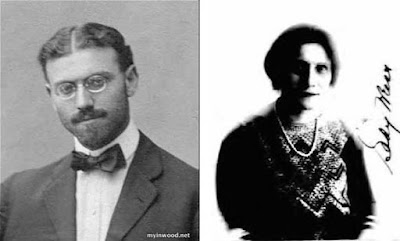