Houdini’s Girl Detective: The Real-Life Ghost-Busting Adventures of Rose Mackenberg by Tony Wolf is available now in a print edition and eBook. I've been eagerly awaiting this one since we first got word of it back in May. Here's the cover and description from Amazon: 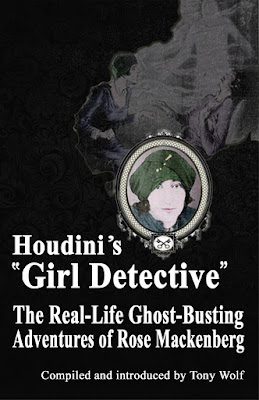 The 1920s: a time of unprecedented belief in "spiritualism", or the practice of ostensibly communicating with the spirits of the dead. Into this milieu stepped Rose Mackenberg, a private detective trained by the great magician and escape artist, Harry Houdini. Her mission: to investigate and expose "ghost racketeers" who used magic tricks and psychological manipulation to con bereaved people out of their hard-earned cash. "Houdini's Girl Detective" is an illustrated anthology of Rose Mackenberg's original 1929 newspaper article series, detailing her sometimes hair-raising adventures exposing the chicanery of the ghost racket.


You can purchase Houdini’s Girl Detective: The Real-Life Ghost-Busting Adventures of Rose Mackenberg at Amazon.com (U.S.) and Amazon.co.uk (UK).