Houdini to Hang! How's that for an attention getter? In 1922, when this appeared in the Washington Herald, hanging was still the standard form of execution in D.C., so this would have certainly given a reader pause. But that was the whole point. 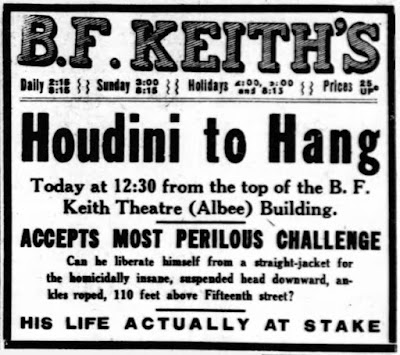 As you can see, this ad is actually referring to Houdini's suspended straitjacket escape from B.F. Keith's Theater in the Riggs Building on January 12, 1922. I probably don't need to tell you that Houdini survived his public "hanging."

But this begs the question; did Houdini ever do a stunt that involved his own hanging? Programs do show Houdini performing something called the "Jesse James Hanging Trick," but it's likely this was a magic effect and not an escape (possibly Rope Through Neck).

In Walter B. Gibson's Houdini's Escapes (1931) that are notes for what Houdini called "The Gallows Restraint." This did not involve actual hanging, but it evoked it, as you can see in the illustration below. But it doesn't appear Houdini ever developed this escape beyond these notes. 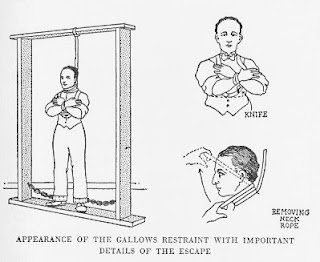 In case you're wondering, Washington D.C. switched to electrocution as their means of execution in 1927. Of course, Houdini had fun with electric chairs as well.