Houdini in his workshop

For Labor Day, I couldn't resist sharing this amazing image of Houdini in his New Jersey workshop preparing magic apparatus for his 1925-26 3 Shows in One. This photo comes from the formidable collection of the great Kevin Connolly. Kevin recently shared this at his Facebook group, CONJURING HISTORY - BUY, SELL AND TALK. 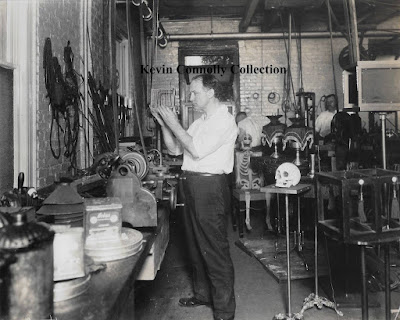 The folks over at Kevin's group have been doing a great job dissecting what we can see here. Houdini is holding what appears to be a Vanishing Birdcage. This was actually a Harry Blackstone specialty at this time. Behind him we can see a pair of Conradi Vanishing and Appearing Lamps. These once went wrong during a show and Houdini denounced the manufacturer from the stage. Another thing spotted by the eagle-eyed David Charvet are what appear to be two 35mm film canisters on the work bench.

It's been suggested that Houdini's New Jersey workshop may have been located in the same building that once housed his Film Developing Corporation (FDC). That building still stands today.

Thanks to Kevin Connolly for generously allowing to share this shot. Hope you are all having a relaxing Labor Day weekend and are ready for the Fall "seance season."

UPDATE: To help our discussion in the comments below, here's the other more well-known image of Houdini in his workshop. This comes from Gresham's Houdini The Man Who Walked Through Walls and is credited there to "Brown Brothers." 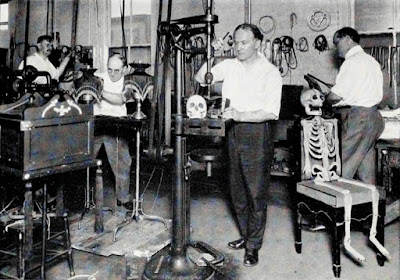 UPDATE: Having now been in the building, I can say with almost complete certainty that the workshop was on the ground floor. I was in the room where all the windows, wall features, and even the views match. Here's a pic. 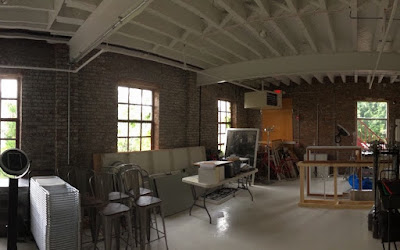