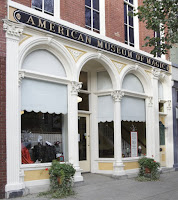 The Detroit Free Press reports that the American Museum of Magic in Marshall, Michigan will hold several Houdini and escape-themed events next month to mark the 90th anniversary of Houdini's death. The museum is also planning a special event on Halloween, but details are being keep secret for now.

"Let's just say that it will harken back to 1978 when the museum was new, and it will focus on the great Houdini and his legacy," museum administrator Cindy Lake said.

Looks like next month is going to be jam-packed with Houdini happenings to celebrate the 90th. I've established a new hashtag #Houdini90th so you can keep up with all the events here as well as on Twitter and Facebook.