It was two years ago tonight that the Houdini miniseries starring Adrien Brody first aired on the HISTORY channel. To mark the occasion, here's a look back at the making of 'Houdini' with some terrific behind the scenes photos from technical advisor David Merlini. 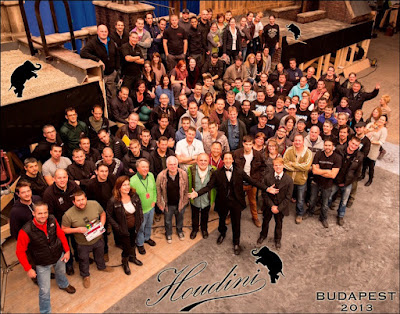 In the spring of 2013, Hollywood had no less than a dozen Houdini projects in development. Summit Entertainment was working on a screenplay that featured Houdini as a super spy. Sony was developing a movie in which Houdini and Chung Ling Soo battled the super-natural. ABC even purchased an idea for a TV series in which Houdini’s ghost would work alongside a female detective in contemporary New York. One thing they had in common: they were all highly fictionalized treatments of the great magician’s life.

Then on April 10, 2013, news broke that Oscar winner Adrien Brody had made a deal to star in a Houdini miniseries that would air on the HISTORY Channel. This new Houdini promised to be a biopic that “traces the arc of the turn-of-the-20th-century master magician’s life from desperate poverty to worldwide fame.” Overseeing the project would be veteran TV producer Gerald W. Abrams, father of director J.J. Abrams. 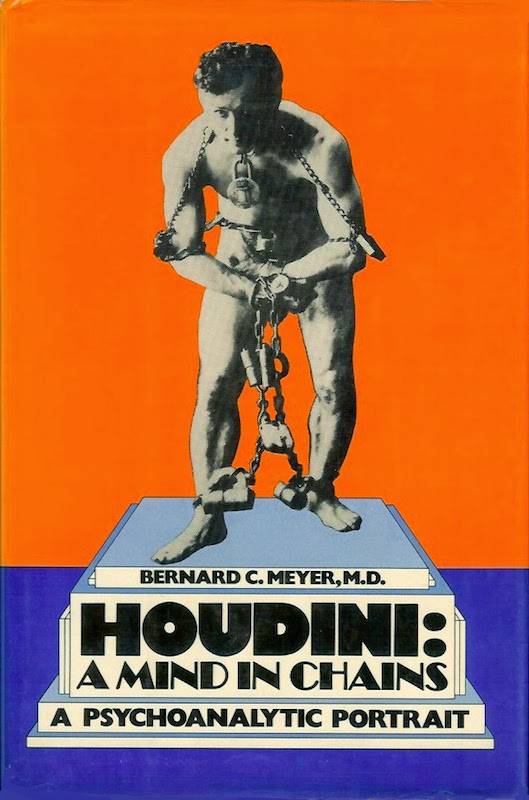 Unannounced at the time was that screenwriter Nicholas Meyer of Star Trek and The Seven-Per-Cent Solution fame had already penned the first drafts of the screenplay. The writer had an interesting personal connection to Houdini. His father, Bernard C. Meyer, wrote a psychoanalytic study of the great magician in 1976 called Houdini: A Mind in Chains. Meyer agreed to do the job only if the producers optioned his father’s book, which they did. However, Meyer’s final script would owe more to the uncredited 2006 biography, The Secret Life of Houdini: The Making of America’s First Superhero by William Kalush and Larry Slomon, than it would to his father’s work.

The Houdini miniseries would span two nights. Meyer originally gave each installment a unique title. Part One was to be called “Becoming Houdini” and Part Two was “Being Houdini.” However, this two title idea was eventually dropped.

On August 19, 2013, producers Lionsgate and A+E Studios (parent company of HISTORY) gave Houdini the greenlight to start production in the fall with Brody as Houdini and the talented Kristen Connolly as his wife Bess. Wishing to portray Bess as accurately as possible, Connolly did her own outside research, and even fought the producers on their original idea to make Bess Irish.

Oscar nominee Uli Edel was hired to direct. Other crew members included Patrizia von Brandenstein as production designer and Karl Walter Lindenlaub as cinematographer. The entire production would be shot in Houdini’s birthplace of Budapest, Hungary. This was not an homage to the great magician; rather, the decision to shoot in Budapest had to do with favorable tax incentives offered by Eastern Europe. 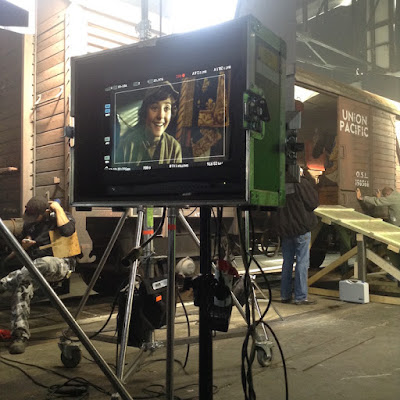 Louis Mertens as the young Houdini.

Digital visual effects (almost 300 shots) would be employed as never before in a Houdini biopic in order to transform the streets and soundstages of Budapest into New York, London, San Francisco, St. Louis and Detroit. Noted escape artist David Merlini was hired as the technical consultant and oversaw the many escapes. 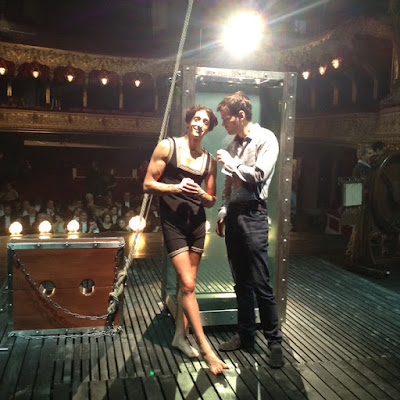 October 31, 2013 marked the 87th anniversary of the death of Houdini. It was also the 14th day of shooting on the Houdini miniseries. The scene that day featured Houdini, Bess, and Jim Collins practicing a straitjacket escape in the Dorchester Hotel in London in 1905 (in the finished film, the scene would appear to be set in Houdini’s house). To mark the occasion, David Merlini proposed a minute of silence in honor of Houdini before shooting the scene. Interestingly, Houdini's actual death scene was shot just a few days later. 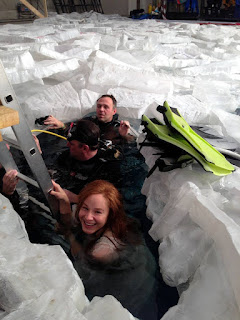 Details of the Houdini miniseries began to leak online even before production had wrapped. Photos of actress Eszter Ónodi under a sheet of ice revealed the miniseries would include the fictional “trapped under the ice” drama so memorably depicted in the classic 1953 Tony Curtis Houdini movie. For fans, this was an indication that the miniseries would embrace popular Houdini mythology.

Principal photography wrapped in mid-December, and Entertainment Weekly offered the first official look at Adrien Brody as Houdini in their February 21, 2014 issue. While the original plan was to air the series in May, it was later pushed to the end of summer.

Post production and editing took place at EPS-Cineworks in Studio City, California. There the editors were faced with the challenge of creating two versions of the miniseries: a condensed version for U.S. broadcast, and a longer cut for international audiences. This would later prove controversial.

Faced with a tight editing schedule, editor Sabrina Plisco expanded the editorial team to include co-editor David Beatty, and assistant editors Jared Zalman and Paul Alderman. "This Houdini is more of a psychological thriller, so we used jump cutting, freeze frames, and contemporary sound and music to give an edginess to a classic story," explained Plisco. 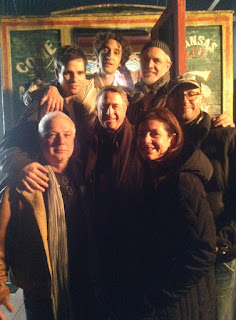 Oscar nominated composer John Debney was brought in to do the musical score. Debney’s music would further the producers desire to give the series a contemporary feel to attract younger audiences. Debney’s score would also be released on two limited edition CDs. However, the music that would draw the most attention was the song "Simple Pleasures" by Jake Bugg that played over the first full trailer (included at the end of this post).

HISTORY began promoting Houdini in late summer 2014. The network launched an official website in which viewers could take a Houdini quiz, and began rolling out impressive online trailers and TV spots. One novel promotion featured bus stops created by Atomic Props that would fill with water, inviting pedestrians to try to hold their breath as long as Houdini.

A few weeks before the series aired came news that Houdini would reveal secrets. This would be the first Houdini biopic to cross this line and break the Magicians’ Code. Star Adrien Brody, who practiced magic in his youth, put as good a face on this as possible, saying, "There is an oath not to reveal certain tricks. And I had issues with this. But the audience will gain an understanding of how some great illusions worked. You could probably find them online these days. I feel like it's an interesting facet of the storytelling, but I don't really like that certain things are revealed because he wouldn’t have wanted to reveal them." 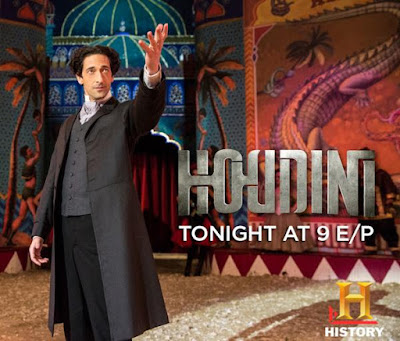 Critical reaction to the miniseries was mixed. Brian Lowry in Variety opined: “Houdini erects a cage from which even the renowned magician can’t escape: Nicholas Meyer’s misbegotten, heavy-handed, narrated-ad-nauseam script and Uli Edel’s equally obtrusive direction. Spread over two nights, there are intriguing elements for those fascinated by Houdini, but the movie feels less like a gut punch than a head blow.”

Allison Keene in The Hollywood Reporter was kinder, saying: “The miniseries nails the most important thing: spectacle. Edel's refreshingly dynamic direction and Brody’s buoyant performance allow Houdini's tricks to retain their wonder, even for the jaded modern viewer. That’s a magical feat indeed.” 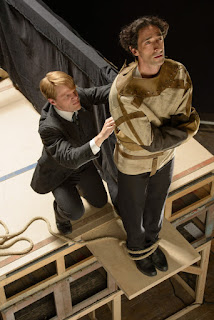 Magicians and magic bloggers were predictably upset by the many historical inaccuracies. The general consensus was a channel that calls itself HISTORY should have shown more sensitivity to the facts. Even news station KSDK in St. Louis caught Houdini fact check fever, taking issue with how the miniseries showed Houdini leaping from their own Eads Bridge when he did no such thing. (My own Fact Check of Night One remains my most viewed post of all time.)

It didn’t help matters when producer Gerald Abrams defended the film by stating, "Since this was four or five generations ago, there's no one around to say it didn't really happen the way we show it." Screenwriter Nicholas Meyer’s own feeling was that, “The Italian expression se non è vero è ben trovato seems to apply" (even if it is not true, it is well conceived).

One recurring complaint was that the miniseries didn’t carry a disclaimer, as did the 1976 TV movie The Great Houdinis, which also played fast and loose with the truth. However, when Houdini aired on Sky TV in the UK the following week, a disclaimer was in place. That’s when it was reveled publicly that two different versions of the miniseries existed.

Nicholas Meyer did not hold back his feeling about the two versions, particularly what was shown to U.S. audiences on HISTORY. “I much prefer the Lionsgate [International] version,” he told the official Star Trek website. “[HISTORY] re-cut the movie, and tore a lot of it out, and put in a lot of voiceovers and stuff that I just wasn’t crazy about. And wasn't our intention. It hadn't been written.” 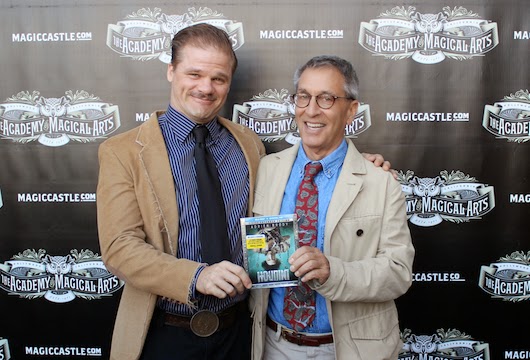 Evan Jones and screenwriter Nicholas Meyer at the DVD launch.

Both versions of the Houdini miniseries were included on the DVD and Blu-ray released by Lionsgate Home Entertainment on October 7, 2014. To promote the DVD release, Nicolas Meyer and actor Evan Jones hosted a Houdini séance at The Magic Castle in Hollywood to which select reporters and bloggers were invited.

Houdini was nominated for 11 Emmys, winning one for Outstanding Sound Editing For A Limited Series, Movie Or A Special. The miniseries was released to Netflix in March 2015, which is where many discovered it for the first time. Today, props from the miniseries can be seen at David Merlini's The House of Houdini museum in Budapest.

Unlike what was promised when first announced in April 2013, the Houdini miniseries proved to be a liberal confection of fact and fiction that did not always mix well together. Two years later, I still can't decide whether I love it or hate it. But it had ambition and scale, strong production values, and a major star in the lead, so today it stands as a worthy attempt by Hollywood to tell the life story of Houdini.

Thanks to David Merlini for providing all the terrific behind the scenes photos. This article was first published in my now out-of-print booklet 'Fact Checking HOUDINI The Miniseries'.