In March 2014 the Gristle Art Gallery in Williamsburg, Brooklyn had a exhibition of Houdini-related artwork called "The Elusive Key." Curator Samantha Levin of Levin Fine Art described the collection like this: 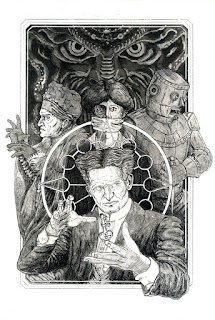 "The Elusive Key was named for the rumor that Houdini’s wife snuck him a key in a kiss that allowed him to open handcuffs that “could not be picked by mortal man,” but I told the artists that they could choose any aspect of Houdini’s life to interpret. Some went for the specific theme, however a few decided to explore Houdini’s strong attempts to defrock false mediums who fooled many people out of their money into thinking they could talk to the dead. Yet others interpreted other aspects of Houdini’s legacy."


The result was some pretty unique artwork, and I'm sorry this slipped past me when it was originally shown. Happily, the art is still online and can be seen at the Gristle Art Gallery and Levin Fine Art websites.

The artwork pictured here by Michal Brodka is called "There Has Been No Miss Brent Here This Evening" and is a tribute to Houdini's silent serial The Mastery Mystery.

Related posts:
Written by John Cox at 7:45 AM

Email ThisBlogThis!Share to TwitterShare to FacebookShare to Pinterest
Tags: Artwork, Q The Automaton, The Master Mystery (1918)