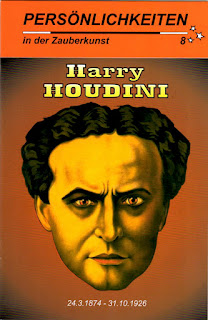 Arthur Moses recently uncovered this 20 page German "Harry Houdini" biographical booklet from 2014. It runs 20 pages and is #8 in "Personlichkeiten" series. According Arthur, the booklet is nicely done with many photos and illustrations.

One curious thing the booklet contains is an illustrated "exposure" of Houdini's Walking Through A Brick Wall on page 18. The explanation is pretty far out. It includes mechanical hands and Houdini disguised as a brick layer to sneak around the structure.

This actually first appeared in the November 1929 issue of Modern Mechanics and Inventions in an article that professed to be an exposé of Houdini secrets by his "mechanic" R.D. Adams. I've never heard of R.D. Adams, and many of the explanations were wildly inaccurate, including the brick wall. This is all the more amusing because the real secret of Houdini's Walking Through A Brick Wall is one of his most widely known and published. 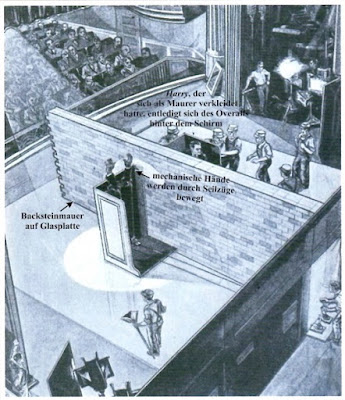 This booklet can be purchased as part of a bundle with The Houdini Code DVD at the website www.magiccenterharri.de.