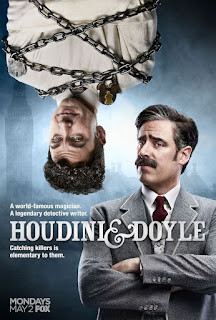 It was a year ago today that the U.S. premiere of Houdini & Doyle aired on FOX. I had the great pleasure of Live Tweeting the premiere alongside star Michael Weston at Fox Studios (where I also stopped in at the 278 of the West). The series ran for 10 episodes, each of which I reviewed and fact checked HERE.

Even though the series was not renewed for a second season, it still has an active fanbase via the HouDoyle fansite and the Houdini & Doyle Fan Group on Facebook. Now those fans are celebrating the one year anniversary with a "Houdini & Doyle rewatch party", starting this week with episode one, The Maggie's Redress.

You can join the fun on Facebook and HouDoyle. All episodes of season one can be streamed via Amazon Video.