The New York Post has an article about David Blaine's "magic lair" in New York City where he creates his illusions and is currently preparing his upcoming tour (begins May 30 in San Diego). The article also contains the following photo and a paragraph that will be of interest to Houdini buffs. 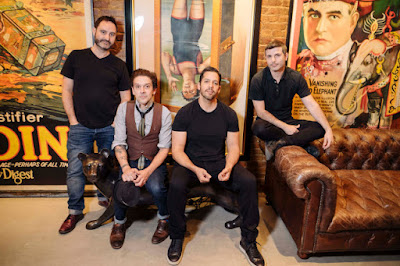 Fifteen years ago, he bought his Chinatown den, the walls of which are covered with vintage posters featuring his favorite magicians, including one that pictures Harry Houdini and that Blaine purchased for an undisclosed, record-setting price. Hidden out of sight are treasures such as Houdini’s handwritten and unpublished show notes.


I expect the poster they are referring to is the Water Torture Cell poster directly behind David and his team. That poster sold in a Potter & Potter auction in February for a record breaking $114,000. So now we know who got it! As for those "unpublished Houdini show notes"...interesting.

David Blaine is a self-acknowledged Houdini fan. He credits seeing the straitjacketed Houdini on a book cover as the thing that sparked his interest in magic -- "the beautiful struggle."

You can read the full article online at The New York Post.