Houdini is featured in the new issue of Heavy Metal magazine (#286). Below is one of three variant covers of this "Magick Special" along wth a preview of "The 1,000 Deaths of Harry Houdini" by Neil Kleid, Michael Avon Oeming, and Taki Soma. 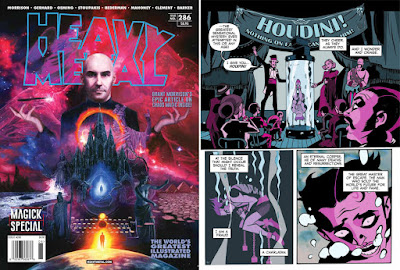 Since mankind's earliest days and stories told around campfires with the darkness of night encroaching on the light, the stories we tell one another have been tinged with magic. From mighty warlocks commanding the forces of nature to gentle fables of urban fantasy, magic is all around us, and in this issue, Grant Morrison and the writers and artists he select explore the magic that touches our souls and fills our nightmares.


You can buy Heavy Metal at the official website or in stores.