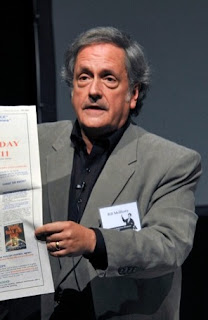 A sad loss to report. William H. McIlhany has passed away at age 66. Bill was a major magic collector who specialized in historic magic film. In 1994, he became the Film and Video Archivist for the Magic Castle.

Bill's great contribution to the Houdini world was the release of The Master Mystery on two VHS cassettes in 1998. This was the first time the Houdini serial had ever been made available to the public. Likewise, Bill arranged for the release of Terror Island on VHS in 1996, paired with the only surviving fragment of Howard Thurston's own 1920 film, Twisted Souls. He also released the 1970 BBC documentary The Truth About Houdini.

I've long heard that Bill owned a near complete version of Houdini's 1909 film, Les merveilleux de Houdini à Paris. However, the last time I spoke with him (at the time of my Hollywood Heritage lecture), he was in declining health and wasn't sure where it was among his vast collection.

Bill lived in Los Angeles with his wife, Bobbie O'Toole McIlhany, who survives him.


Thanks to Kevin Connolly and Phil Schwartz of Thayer Magic.