'The Book of Houdini' combines the books of Houdini

Three works by Houdini have been collected and published as The Book of Houdini by Nevetz Azraz. I normally don't buy (or cover) public domain reprints, but I do like how Nevetz has put effort into creating a book with a unique title and cover, so this one might make it to my shelf. Here's the description. 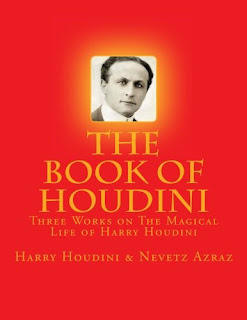 The Book of Houdini contains three publications, all focusing on magic, and the great work of Harry Houdini. The first volume was authored in 1922 and is titled Houdini, The Adventurous Life of a Versatile Artist, and is a glance at just that. The second installment was written in 1908 by Houdini, who penned a work on The Unmasking of Robert Houdin, a study of Robert Houdin's alleged magical abilities. Book III, written in 1920, and the final volume in The Book of Houdini, is called Miracle Mongers and Their Methods, where Harry again analyzes and exposes the tricks behind magic, while sharing the secrets behind some of his own.


You can purchase The Book of Houdini at Amazon.com (U.S.) and Amazon.co.uk (UK).

Email ThisBlogThis!Share to TwitterShare to FacebookShare to Pinterest
Tags: Books by Houdini, Miracle Mongers and Their Methods, Unmasking of Robert-Houdin, Writings