How Houdini didn't vanish an elephant

As a follow up to my post about the German Houdini booklet and Modern Mechanic' bogus explanation of Walking Through A Brick Wall, I thought I'd share that magazine's equally incorrect explanation of Houdini's vanishing elephant. This appeared in the December 1929 issue as the conclusion of a three part series by the mysterious "R.D. Adams." 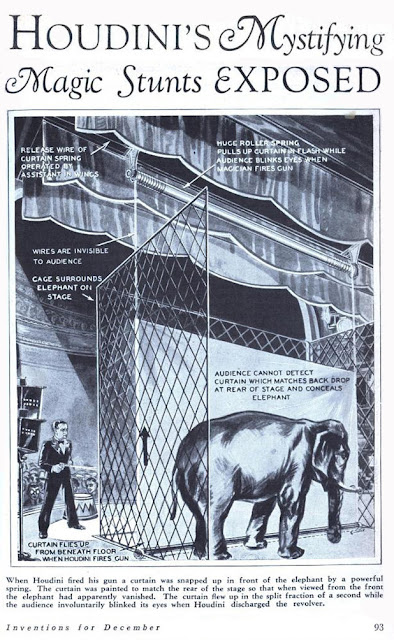 Unlike Walking Through A Brick Wall, we actually don't know for certain how Houdini vanished his elephant. But we know it wasn't as shown above. In fact, even the presentation is incorrect here. Houdini vanished his elephant from a large cabinet, not from behind a screen. The best theories of how Houdini may have accomplished this feat appear in Jim Steinmeyer's brilliant Hiding The Elephant and Patrick Culliton's essential Houdini The Key.

Curiously, even though "R.D. Adams" offered explanations that today appear to be false, both Leonard Hicks and Houdini's close friend Joseph Rinn claimed Adams' did indeed reveal the correct methods.