Mysteries at the Museum reveals "the real ghostbusters"

Houdini is once again the subject of a new segment on Mysteries at the Museum. This time the show pays a visit to the Houdini Museum of New York where owner Roger Dreyer tells the tale behind the museum's recently acquired set of Houdini's spiritualism lecture slides. 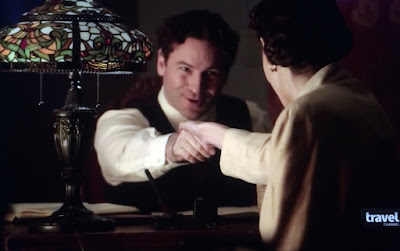 The episode again features Jonathan Shade as Houdini in reenactments that dramatize his crusade against fraudulent mediums, his partnership with his "spook spy" Rose Mackenberg, and his 1926 testimony before Congress. Seeming to play to the current mood, the show lays blame for Houdini's failure to pass the anti-fortune telling legislation on Washington's secret involvement with mediums, even suggesting that spiritualistic influence had reached the White House.

The episode is Season 14, Episode 13 ("The Girl Who Fell to Earth, the Real Ghostbusters and Eclipsed by Columbus"). It's currently in repeats on the Travel Channel with the next airing on May 11 at 7pm/6c. It's also available to stream at Amazon Video.