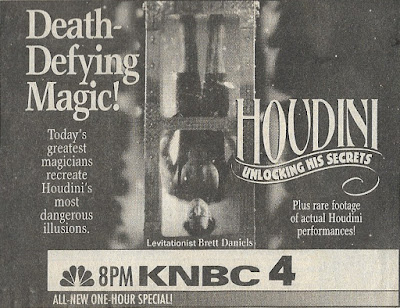 On May 24, 1995, NBC aired the one-hour special Houdini: Unlocking His Secrets hosted by Robert Urich. The show featured modern magicians performing Houdini's feats, intercut with biographical information. It's a well-done special with excellent performances and some nice Houdini photos and film footage. And despite the title, no secrets are revealed.

The stage performances were filmed at Ceasers Palace Circus Maximus on April 30, 1995 (tickets were given out free). Host Robert Urich narrates from the "Magic and Movie Hall of Fame" at O'Sheas Casino in Las Vegas. Here one gets a good look at items from the Dixie Dooley collection. Behind Urich for much of time is the Houdini packing case that Dixie famously retrieved from the basement of 278 in 1985.

The broadcast kicks off with Charlotte Pendragon leaping chained from a riverboat on Lake Mead. It's a well-staged stunt with some nice tension. This is followed by Lance Burton performing a stage-bound suspended straitjacket escape. Again, a well-staged stunt, and it's great to see Burton in his absolute prime. Also in his prime is Mac King who does a comedic thumb tie with Melinda Saxe. The Pendragons do their well-honed Metamorphosis. David Williamson does a very funny take on Houdini's Needles.

It what should be a show highlight, Brett Daniels does Houdini's Water Torture Cell. However, the escape is robbed of tension by over production, with backlighting and smoke and various curtains sweeping up and down over the cell. For me, the best presentations of the USD -- Houdini, Henning, Steve Baker -- keep it a serious "test," too dangerous to load up with smoke machines. Raw tension is all the stagecraft required. Likewise, Jonathan Pendragon's "Exploding Coffin of Death" grand finale seems a little overwrought, but it's in line with the "extreme" escapes of the 90s. Apparently cut from the broadcast was Max Maven who demonstrated the tricks of fraudulent mediums. A shame this wasn't included in the home video release. 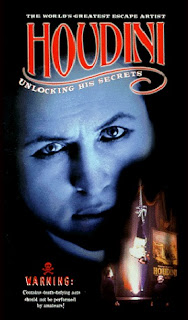 Apart from stating that J. Gordon Whitehead was a "college boxing star" and Houdini's final performance took place in "London, Ontario," the biographical segments are good. There are also a few bits of Houdini film that I don't believe I've seen since.

The film footage is credited as coming from the collection of Manny Weltman "by agreement with Nanette Weltman" (Manny died that year). Another notable name in the credits is Executive Producer Gerald W. Abrams, who would go on to make the Houdini Miniseries with Adrian Brody in 2014. Maybe this is where he first discovered the power of selling Houdini?

Houdini: Unlocking His Secrets was released on VHS by Goodtimes Video in 1996. Without commercials, the show comes in at only 30 minutes. It can can still be purchased at Amazon. Unfortunately, the show never made it to DVD.

Below are links to a few other Houdini television specials from the recent past.


I recently launched a new standalone page devoted to Houdini documentaries and appearances on investigative and reality TV. Check it out under "Media" in the top menu bar or click HERE.
Written by John Cox at 11:37 AM