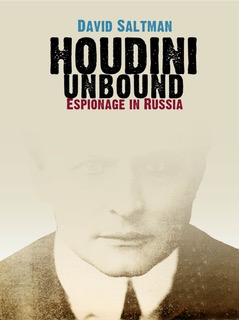 Some great news today. David Saltman's eagerly awaited historical novel HOUDINI UNBOUND will be published in November by Hudson River Books. David has spent 11 years working on the book, which is set during Houdini's tour of Russia in 1903 and finds the magician engaging in espionage on behalf of President Theodore Roosevelt. Other historical characters include Chekhov, Gorky, Diaghilev, Durov the Clown, and Rasputin.

David has authored several non-fiction works, including Gilda, the acclaimed biography of comedienne Gilda Radner. He also runs the the great blog The Houdini File. HOUDINI UNBOUND is his first novel.

You may recall the book had previously been scheduled for release in 2014 by Maiden Lane Press under the title The Escape Artist: Harry Houdini in Russia, but the publisher went out of business.

You can read more about HOUDINI UNBOUND on David's official website. There is yet no listing on Amazon, but I will update as soon as it appears.