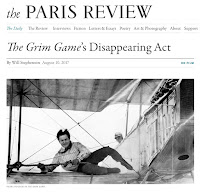 The Paris Review has a well-researched article by Will Stephenson about the reappearance in 2014 of Houdini's lost silent film The Grim Game. Nothing all that new for those of us who followed the blow by blow that year (some links below), but it's a good overview of the story with fresh quotes from Dick Brookz, Rick Schmidlin, and Jon Oliver. (Click the headline above to read.)

One thing this piece does not observe is that The Grim Game has not been shown on TCM since its one airing in 2015, nor has it been released on DVD or streaming. In some ways, The Grim Game is once again Houdini's lost film.