When 'Dead Famous' went in search of Houdini 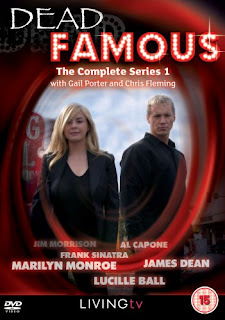 In 2005 Living TV in the UK aired Dead Famous: Houdini, in which skeptic Gail Porter and "sensitive" Chris Fleming went in search of Houdini's ghost. This British series was part of the explosion of dubious "reality" television and part of a sub genre of ghost-hunter shows that aped the style of The Blair Witch Project. Here's a description of the Houdini episode:

Searching for the ghost of Harry Houdini our duo visit the Eastern State Penitentiary, the blueprint for modern escape-proof prisons, where the man known as The Jailbreak King might still be tampering with the locks, and the Palace Theatre on Broadway where Houdini performed in the vaudeville era. But could the man no jail could hold be captured by the cameras?


The investigative segments of the episode are tedious and the research embarrassingly bad. Chris Fleming actually calls out to Houdini as "Harold", and Gail Porter states that Houdini "most famously survived going over Niagara Falls in a barrel." And while it's cool to see the inside of Palace Theater, they then go to Philadelphia's Eastern State Penitentiary for no reason other than "it would have appealed to Houdini." (I suspect this segment was actually filmed independently of the Houdini episode and added to help pad out the hour.)

However, the show redeems itself in the end when the team attends the 2004 Houdini Seance with Dorothy Dietrich and Dick Brookz at the Houdini Museum in Scranton. You get a great look at the museum, and it's an excellent documentation of that year's "Original" seance (not to be confused with the "Official" seance). Jeff Blood, the grand nephew of Harry and Bess, is in attendance and has a moment on camera. Bess's voice from the Final Houdini Seance also gets some nice air play (more than we typically hear).

So despite being the sort of hokum that Houdini himself would have condemned, the show is still worth checking out. Below is the full episode on YouTube.