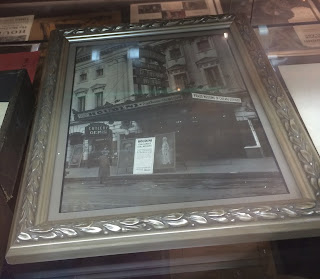 While visiting the spectacular Houdini Museum of New York at Fantasma Magic, I spent some time looking closely at this photo of the Princess Theater in Chicago in 1926. What I love is that it shows us three now lost (as far as I know) Houdini lobby stand displays.

Below is an enlargement that gives a better look at each stand. The first one you can see sitting off to the far left inside a doorway. That stand -- which also appears on page 288 of The Secret Life of Houdini Laid Bare -- has a letter drop box where the public could insert questions for Houdini. In the center is another display with the iconic hand to face image (here it appears to include his second hand). This is only image of that particular stand that I'm aware.

But the one that really excites me is on the far right. This is of a female and in the past my eye has gone right past this because I assumed it to be another performer. But that's Bess! (You can see her in this costume in Silverman).

Knowing that there was a lobby stand devoted to Bess is pretty cool. And why not? She was part of the 3 Shows in One, and the idea of having a poster devoted to a magician's spouse was not unheard of. The upcoming Potter & Potter auction has a lithograph of "Mrs. Keller" (lot 490). What ever happened to this Bessie stand I wonder?

The Houdini Museum of New York is located at 421 7th Avenue, 3rd Floor, New York, NY, and houses one of the largest public displays of authentic Houdini memorabilia in the world.

Stay tuned for another Houdini Museum of New York artifact that I think will give us a lot to talk about.
UPDATE: Here's an even better look at the Harry and Bess stands. You can see Houdini is in handcuffs. Sensational.
Related: