Have we been looking at this photo all wrong? 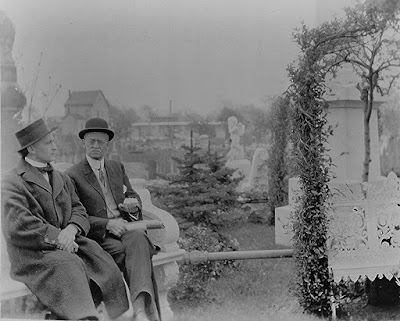 The above photo belonged to Edward Saint and is now part of the Library of Congress collection. There it is captioned: "Houdini is shown here with his brother William." I've let this image of Houdini and "Bill" enjoying a quiet moment in Machpelah cemetery roll over me all these years without thinking much about it. But recently I went down the rabbit hole with our great friend Colleen Bak from Queens, and realized I've been looking at this photo all wrong!

For starters, I don't think that is William Weiss. To my eye, that appears to be Oscar Teale, Houdini's private secretary who was tasked by Houdini to create the large marble exedra for the family plot in Machpelah cemetery in 1915-16. Teale appears to be holding something in his hand. What could that be? I'll come back to that.

So can we prove this is Machpelah? Happily, yes! While there are a several photos of Houdini in Machpelah, this is the only one that shows anything that is today still recognizable. The bench that Houdini and Teale are sitting on appears to be one of the stone benches that are still there today (although the benches today are replacements for the originals destroyed by vandals in 1993). Armed with this photo, Colleen and her husband Frank did a little digging (ha!) and pinpointed exactly where this photo was taken. 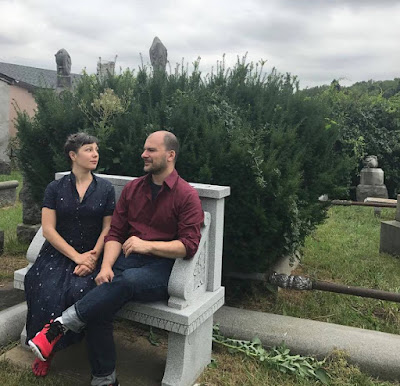 As you can see, this appears be have been taken in the South West corner of the family plot. There are three distinct graves behind both Colleen/Frank and Houdini/Teale that are unmistakable; an urn, angel, and obelisk. Unfortunately, this also reveals more vandalism as only the base and foot remain of the angel in the center of the image. 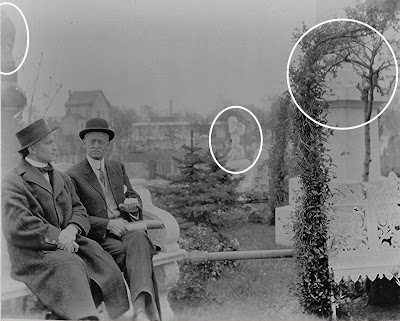 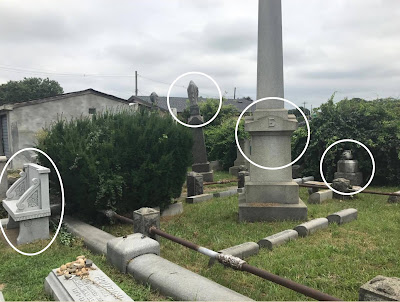 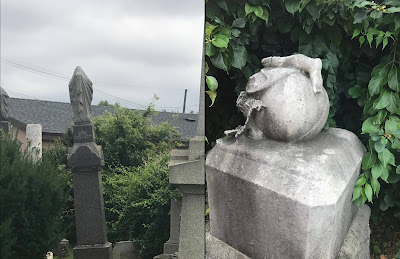 Now, the location of the bench in the Houdini photo brings up a few observations. First off, this is Houdini sitting almost on top of his own final resting place. Back then it appears the plot had a gated entrance where Houdini's grave is today. It also appears the bench is not positioned as it is today. Today it sits perpendicular to the plot, directly facing the other bench. (This is why the angle on the Colleen/Frank shot is somewhat different.)

But in the Houdini/Teale photo, the bench appears to be sitting at an angle. It's actually facing towards the exedra. And that's what makes everything fall into place and why I think we have been looking at this photo all wrong.

Look at the photo again with its newly understood position of the bench in mind. Houdini is looking in the direction of the exedra with concentrated interest, and Teale is looking at him as if seeking approval. And what are those in Teale's hands? Design plans maybe?

So far from being a moment of repose with a family member, this appears to be Houdini and Oscar Teale either inspecting the newly installed exedra or possibly planning where the exedra will sit (because we really have no way of knowing whether it's there -- possibly the benches proceeded it?).

If this was a planning session or first inspection, it seems unlikely this would be the only photo taken that day. So are there more photos out there? Is there one that will finally give us a good look at the exedra as it appeared in Houdini's lifetime (before the S.A.M. mosaic and bust). Just another piece of the Houdini jigsaw puzzle!

Thank you Colleen and Frank for the great detective work.

Postscript: After I finished this post, I stumbled on an article that highlights some Houdini diary entries for the year 1916 (the year of the exedra dedication) and noticed this: