Houdini shows you how to Escape Everything!

Escape Everything! by Robert Wringham uses Houdini to teach one how to "cut loose the shackles" of modern living. This was actually released last year, but it escaped me! 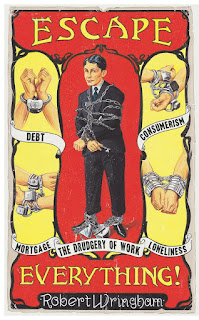 We will each spend an average of 87,000 hours at work before we die. We will spend another 5,000 hours getting to and from work and countless more preparing for work. Worrying about work. Recovering from work. The majority of us hate our jobs. But without work, we can't buy all the things we've been told we should want and need, so around we go. Through the pages of New Escapologist magazine, Robert Wringham has been studiously examining the traps of modern life, questioning where our commitment to them stems from and why we are so unable to break free. Taking inspiration from the great Escapologist Harry Houdini—who escaped from jail cells, straitjackets, and even the innards of a dead whale—Wringham applies Houdini's feats as a metaphor for real life, proposing the principle of Escapology as a way to cut loose our shackles. Become a modern-day Escapologist and freedom and happiness might be possible after all.


You can purchase Escape Everything! at Amazon.com (U.S.) and Amazon.co.uk (UK).

This is not Houdini's first foray into the motivational arena. Below are links to a few other examples of Harry Self-Help.