Houdini's 1983 turn as a serial killer

In 1983 a play called The Lives and Deaths of the Great Harry Houdini was featured at the Williamstown Theater Festival in Massachusetts from July 6-14. Steve Skibell played Houdini and Stephanie Shine played Bess. In digging around for information online, I found the following surprising description:

"The Lives and Deaths of the Great Harry Houdini presents the great escape artist as a serial killer." 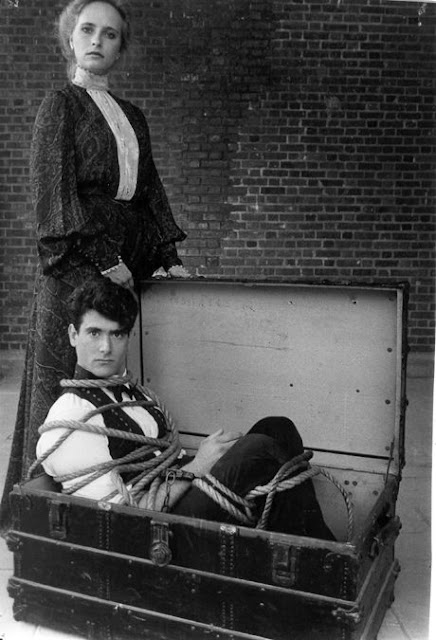 The Lives and Deaths of the Great Harry Houdini was written by David Ives who would later become involved in the aborted Houdini Broadway musical with Hugh Jackman. He also adapted David Copperfield's Broadway show, Dreams and Nightmares, in 1996.

While this is the first time I've heard of Houdini himself being protrayed as a serial killer (man, nothing surprises me anymore), in the 1999 film, Oxygen, Adrian Brody played a serial killer who goes by the name "Harry Houdini" and leaves clues to his crimes on Houdini's grave

Photo of Steve Skibell and Stephanie Shine as Harry and Bess from the Williamstown Theater Festival archives.