'Letters To West 113th' at the Edmonton Fringe

Mentalist Jeff Newman will bring his Houdini-themed one-man show Letters To West 113th to the Edmonton Fringe Festival for performances starting this Friday, August 18. Newman was recently interviewed at After the House Lights and had this to say about the play: 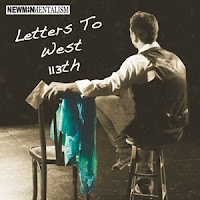 "I use my skills of trickery and deception to tell an incredible tale. Near the end of his career, Harry Houdini spent countless hours investigating (and debunking) psychics, mediums, and spiritualists who claimed incredible supernatural abilities. Letters To West 113th recreates Houdini’s confrontation at the final performance of Thomas Whitford, a magician known for re-emerging into the spotlight after the death of his wife Tessa with an act that stirred rumours of incredible supernatural talent from the audiences that saw the show."

Showtimes and tickets to Letters to West 113th can be found at the official Edmonton Fringe Festival website. The show last played the festival in 2015.

Speaking of plays, I recently launched a new reference page devoted to Houdini theater. Check it out under "Media" in the top menu or click HERE.