The excellent documentary Houdini: People Came to See Him Die will finally be released on DVD tomorrow, Halloween, at 1:26 PM. The documentary originally aired on the Discovery Channel in 1996, then was released on VHS by Unapix. According to director Gene M. Gamache, this is a slightly recut and remastered version that had a limited theatrical release in 2013. 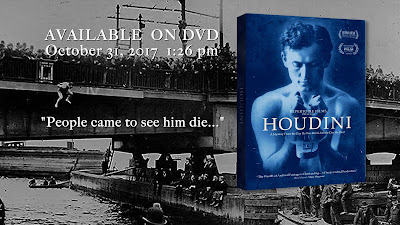 Watch the official Houdini People Came To See Him Die Facebook page tomorrow for details on how to buy. One sheet posters from the 2013 release will also be available for purchase.

UPDATE: You can now purchase the DVD and poster HERE. Use the special discount code Halloween1926 and receive free domestic standard shipping.