The Master Mystery novelization for Kindle

Book Revivals is offering a new Kindle edition of The Master Mystery by Arthur B. Reeve and John W. Grey. Here's the description on Amazon. 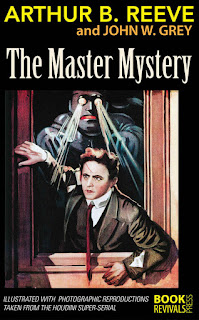 The Master Mystery is the novelization of a 1919 silent serial film told in 15 episodes from scenarios written by Arthur B. Reeve in collaboration with Charles A. Logue. The film stars Harry Houdini and is also known as "Houdini Super-serial." It tells the story of Justice Department agent Quentin Locke as he investigates a powerful cartel protected by The Automaton, a robot.

This eBook is illustrated with all the photographic reproduction that appeared in the original book edition by GROSSET & DUNLAP, NEW YORK, 1919.


I would love it if the publisher offered a printed edition, especially as they are the first reprinter (is that a word?) to use a Houdini cover on the photoplay.