Houdini is back on the case in 'La Reine de Budapest' 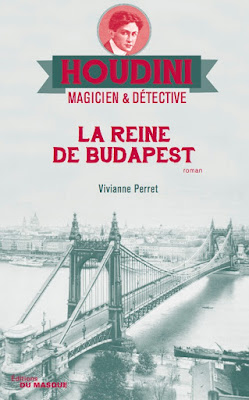 This time the action is set in, you guessed it, Budapest! There Houdini become involved with a women suffering from amnesia while also investigating the death of young bookseller. The local police believe it was accidental, but Houdini believes it was murder...

Also released today is Vivianne Perret's first book, Metamorphosis, in a new mass market paperback edition, part of the prestigious "Grands Détectives" series. That adventure is set in San Fransisco in 1899. While Vivianne's plots are fiction, all the books are set in a time and place accurate to Houdini's career.

La Reine de Budapest can be purchased from Amazon.fr and Amazon.co.uk. A Kindle edition will be released in the U.S. on November 8 and can be pre-ordered at Amazon.com.