The 1996 book Historic Resumes of Famous Americans by Timothy Doe imagines what the resumes of some famous Americans would look like, including Houdini. (Yes, Houdini was actually Hungarian, but I won't tell if you don't.) As you can see, our boy makes the cover. 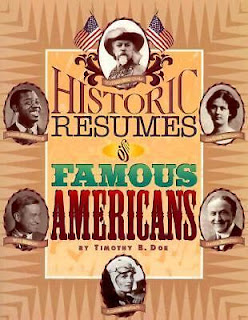 If the most famous and admired people in American history submitted their resumes, this is what they would look like. Thoroughly researched and colorfully written by Tim Doe, the owner of a L.A.-based resume company, each entry is written as if it were actually composed by its subject. Among those featured are P.T. Barnum, Edgar Allan Poe, Huey Long, Amelia Earhart, Jackie Robinson, and Harry Houdini. 60 photos.


You can purchse Historic Resumes of Famous Americans at Amazon.com (U.S.) and Amazon.co.uk. (UK).