Heads up for one more Halloween event. Temple University in Philadelphia will host a lecture by author Laurence Roy Stains on "A Death Foretold: Sir Arthur Conan Doyle, Harry Houdini, and their Epic Battle over Spiritualism" at the Paley Library at 3:30 PM. Below are details:

Join us this Halloween afternoon as Professor Laurence Roy Stains takes us into the world of 20th century paranormal communities. 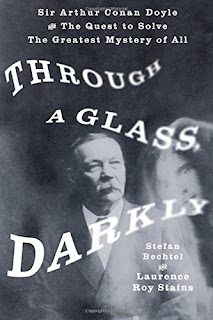 When you die, will you continue to exist in spirit form? Can you make contact with the souls of the departed—with ghosts? The conviction that both things are true was the cornerstone of Spiritualism, a worldwide movement that reached its peak a hundred years ago. Its foremost spokesman was Arthur Conan Doyle, the creator of the hyper-rational detective Sherlock Holmes. He was friends with the great escape artist Harry Houdini—until Houdini tried to expose the Boston medium Mina Crandon, whose séances with her dead brother, Walter, had attracted the attention of Scientific American magazine. The detailed records of these séances provide a fascinating look at a forgotten practice, and the ominous predictions of Houdini’s death will send chills down your spine.

Laurence Roy Stains is an associate professor of journalism at Temple. He is the author, with Stefan Bechtel, of the newly published book Through a Glass, Darkly: Sir Arthur Conan Doyle & the Quest to Solve the Greatest Mystery of All (St. Martin’s). He has written for many national magazines and won a National Magazine Award in 2011.


For more details visit the event page at Temple University.

I admit the book Through a Glass, Darkly slipped past me when it was released in June. You can purchase at Amazon.com (U.S.) and Amazon.co.uk (UK).