HISTORY brings back 'Houdini' for October

HISTORY will repeat their two-part Houdini miniseries starring Adrien Brody and Kristen Connolly on Wednesday, October 18 at 8:30am (Part 1) and 10:30am (Part 2). Proceeding the miniseries will be repeat of Brad Meltzer's Decoded (7:00am) and the "Houdini Handcuffs" episode of Pawn Stars (7:30am). 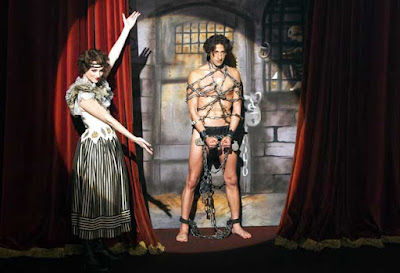 Houdini originally aired in September 2014. The version HISTORY shows is edited. The unedited International version is available on DVD and Blu-ray. Houdini can also be streamed on Amazon and Netflix.

But if you are going to watch just one Houdini biopic this month, I'd recommend the Tony Curtis classic Houdini (1953) which airs several times on MOVIES. While both dabble in fictionalizations, the Curtis film is a better movie about magic and a much more affectionate portrait of Harry and Bess.