After years of silence (91 to be precise), Houdini's spirit was pretty chatty on Tuesday night, with mediums at the Official Houdini Seance in Cleveland and the Los Angeles Houdini Vigil claiming contact with the master mystifier. No word yet if Harry also dropped by the Original Seance in New York or the Annual Seance in Las Vegas.

In Cleveland, it was medium Marianne Goldweber who broke through during the Official Houdini Seance, which this year was held in a former bank vault. Through Marianne, "Mr. Houdini" complained about how he "got screwed" out of money by a theater in Cleveland (sounds like him), and that he was good with the ladies (not so much). You can see video of Marianne doing her thing HERE. (I'll have some photos from the seance later this week.)

Here in Los Angeles, I had the pleasure of attending the "Harry Houdini Halloween Vigil" with Investigative Psychic Medium Jill Marie Morris. The sold out event was held at the Dearly Departed Tours & Museum in Hollywood, which houses among other things Jayne Mansfield's death car. Fellow Houdini nuts Joe Fox and Mark Willoughby also attended. Jill was very welcoming and gave us each a nice intro and a chance to speak and field questions from the audience. I was happy to offer up the real story behind "Houdini's House" in Laurel Canyon, and I thought this Halloween crowd would appreciate the story of the ghost Houdini couldn't explain. 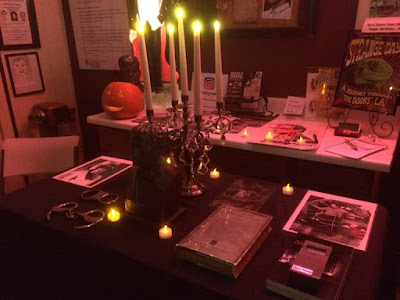 The vigil then got underway, with Jill going around the room doing cold readings for attendees, sometimes hitting on some remarkable and spooky connections. I learned that I had a "pink aura" and a general sense of gratitude...for which I was grateful. No visits from departed loved ones for me, but I was waiting on you-know-who.

After a break with pizza and wine beside Jayne's death car, we got down to the Houdini work. Jill first contacted Bess, who curiously came accompanied by Natacha Rambova, Rudolph Valentino's widow and a spiritualist advocate. While I don't know of any connection between Bess and Rambova in life, we figured the two might get along well in the afterlife, considering both were widowed within months of each other in 1926. Also, Rudy and Ed Saint are both at rest in Hollywood Forever Cemetery, right across the street from the museum, so they all seem to now be part of the same Hollywood family.

Unfortunately, Bessie's visit was interrupted by a visiting spirit of a Magic Castle magician who recently committed suicide. This was a little too recent and personal for my tastes, so I was happy when we moved beyond that.

The next spirit identified himself as "Willie", who I volunteered might be William "Bill" Weiss, Houdini's older brother who died in 1925. (It should be said I've never heard him called "Willie" in life, but that is the name on his tombstone.) It was good to hear from this most elusive Weiss sibling, who came with the information that Houdini "was duped" and "we were hungry." We weren't exactly sure what "duped" referred to (there was also a mention of boxing), but being hungry could certainly have been a childhood memory. Or maybe Budapest, Hungary? The number 401 then came through loud and clear, and I was embarrassed that I did not instantly recognize it as the hospital room in which Houdini died (someone Googled it and shouted it out).

Finally, Harry himself showed up, and seemed to overwhelm Jill with the force of his personality and "arrogance" (check). She said he was messing with her (double check) and kept showing her a charcoal drawing and repeating that it was a good likeness of him. I didn't want to interrupt Jill's (or Harry's) flow, so I didn't volunteer that this might have been a reference to Sam Smiley's famous sketch that he was doing in the dressing room when Houdini was punched. In life, Houdini said of that sketch, "You made me look a little tired."

Jill also kept receiving an impression of cuffs and chains, then said Houdini "doesn't like the piano." Some thought this was a reference to the Magic Castle--the piano being the famous Irma--but I then volunteered that he might be talking about his own home in New York and his recently vanished piano. Jill seemed to think that was correct, and Harry then denounced "those clowns". I did ask Jill/Houdini one of his own medium busting test questions, which he did not answer. Jill then said Harry was singing loudly, and all I could think of was Paul Michael Glaser in The Great Houdinis singing Rosabelle, but thankfully Paul's still alive. 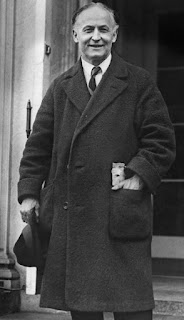 Thus far nothing Jill said was unknowable via an online search, but then she looked at me directly and said, "He's asking if you like his coat?" Some thought this was a reference to his straitjacket. But I instead volunteered that I had very recently been thinking about Houdini's overcoat, which we see in many photos (including the one on the right), and wondering what ever became of that coat and his other clothes. So that was a cool out-of-the box moment.

The crowd was very receptive and very nice, with many true believers eager to hear messages from loved ones, and many of them did. I myself tried to emphasize that Houdini was not a hardened skeptic and that his mind was always open to the possibility of spirit communication, just as all of ours were open on this Halloween night.

After the vigil, Jill gave me a nice bottle of "Freakshow" wine as thanks for my participation and for bringing some Houdini artifacts. I also chatted with Scott Michaels, owner and operator of the Dearly Departed Museum, who told me he was born in Grace Hospital!

So, yes, it was a busy Halloween for Houdini. And while we might debate whether or not he actually came back to Marianne or Jill, I think we can all agree that the spirit of Houdini is alive and well in 2017.

UPDATE: You can now read Psychic Medium Jill Marie Morris's own account of the evening here: A Conversation With Harry Houdini.