The American Museum of Magic in Marshall, Michigan, has shared news of a very special visitor; June Horowitz, who at age 104 has experienced a remarkable life in magic, and even once had Houdini visit her home! That make June the only person that I am currently aware of who has a first hand memory of the great magician.

Below is an image from June's visit and description from the American Museum of Magic Facebook page. 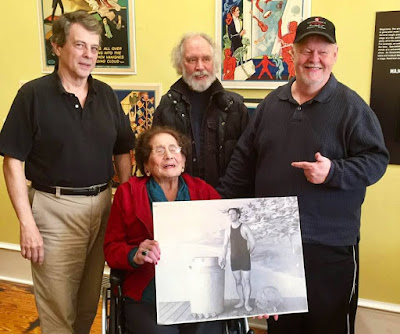 June Horowitz visited the museum this morning, remarking that almost 39 years have passed since the first time she visited. As is often typical, she attracted the attention of local magicians eager to see her yet again and to hear her marvelous stories.

June became the first woman president of the International Brotherhood of Magicians (IBM) in 1987. A former math teacher at Ottawa Hills High School, both her husband and her father were also famous magicians of their era. Indeed, when June was a child, her father was visited by the best known magician of all time, the great escapist Harry Houdini. June says she was somewhere between seven to twelve years old at the time, but she remembers it well.

June said she enjoyed everything in the museum this morning, including the tricks a few members of Ring 89 performed for her (and she performed one for them, as well), but she seemed most taken with our copy of The Discoverie of Witchcraft, the first English book on magic published in 1584. It was very clear to those present that June's love of magic is as strong now as it has ever been.

Our thanks to June Horowitz, her long-time friend Sylvia Herman, and June's care-giver Cathy, for making the trip from Grand Rapids to Marshall.

A few months ago, in September, June turned 104. She may well be the most loved magician in all of Michigan and it was an honor to welcome her again to the American Museum of Magic.


The American Museum of Magic in Marshall Michigan is located at 107 E Michigan Ave, Marshall, MI 49068. It's open April through December. For more information visit their website and Facebook.