A green canvas sack said to have been used by Houdini sold last week in a Bloomsbury auction for £1,500 ($1,978). Below is the auction description. 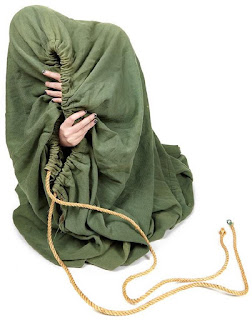 A green, oversized, canvas sack used by Harry Houdini (1874-1926) as a prop for some of his escapology tricks. The sack, which measures 76" x 46", is thought to have been used by Houdini circa 1915. The sack was a gift from Houdini's brother, Theo to a mutual friend following Houdini's death; then in possession of the mutual friend's family; Christie's "Pop Culture: Film & Entertainment Memorabilia" sale, 23 November 2011


So is this really a Houdini prop? Could it even be the sack Houdini and later Hardeen used in Metamorphosis? We now know the trunk Hardeen used was Harry's, and that was also green. And a straitjacket owned by the same gentleman who originally owned this sack was positively identified as being the straitjacket Houdini used in many of his suspended straitjacket escapes. (Both the straitjacket and this sack sold at Christie's in 2011, see link below.)

However, all the known images of the Houdini and Hardeen doing Metamorphosis show their sack did not have drawstrings as this one does. The Metamorphosis sack was tried shut with a small length of rope or cloth that was marked for later identification. So this doesn't appear to be a Metamorphosis sack. But could it have been used for something else? I can't recall any other Houdini escape or magic effect that involved a sack. Unless this is gaffed, my best guess would be this was used behind the scenes...as a sack.


Thanks to Joe Long for the news.