Copperfield is "trying to get" Houdini's bookcase 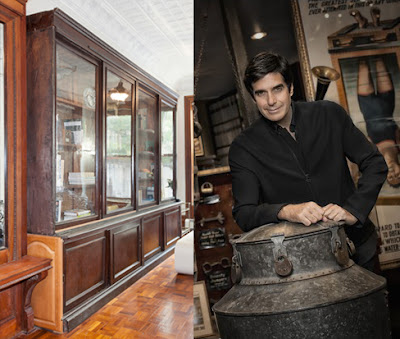 If you've been following the story of the sale of Houdini's home in New York (278), you'll recall a bit of mystery in regards to his original bookcase. After the first open house in June, in which lucky attendees, including myself, got to recreate Houdini's famous pose beside the case, the bookcase mysteriously vanished, as reported by attendees at the second open house. After initially reporting that the bookcase had been sold to a private collector, the relator told me I was mistaken. It had simply been moved to another property.

Now David Copperfield has confirmed that he's trying to acquire the famous bookcase for his "International Museum and Library of the Conjuring Arts" in Las Vegas. In an interview with Luis de Matos about Magic Books, Copperfield speaks about owning "half" of Houdini's library (the half that went to John Mulholland), and then drops this bombshell:

Copperfield: We're trying to get the cabinet from his house that was just discovered, so the cabinet...the bookcase can be reunited with his books. Wish me luck with that. We'll see what happens.


So there we go. The bookcase is in play, and that's probably why it's no longer in the house (and therefore not part of the sale). Will it reappear in Las Vegas? Stay tuned.

You can watch the full interview at the Essential Magic Collection Facebook page.

UPDATE: David Copperfield has Houdini's bookcase and a message for all of us.