It was 100 years ago today the Houdini performed a suspended straitjacket escape in New York's Times Square. For the occasion, here's a rarely seen image that gives us a completely different perspective on the escape than the more familiar photos. 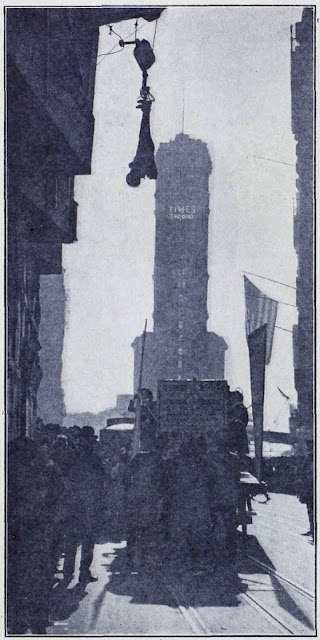 Houdini had attempted to stage a suspended straitjacket escape in Times Square (still sometimes referred to by its original name, Longacre Square) a year earlier to promote his appearance at the Palace Theatre. But the police stepped in and stopped it. He did the escape the next day in Battery Park (a story I recently shared HERE).

This time Houdini, who had committed himself to the war effort, was looking to promote a benefit he was organizing at the Hippodrome for families of the 67 victims of the SS Antilles, an Army transport ship that was torpedoed by a German U-boat the previous month. Houdini reached out to the politically connected Elsa Maxwell, who was able to help him secure permission to perform the escape "for the purpose of advertising a patriotic performance."

Houdini performed the escape on November 5, 1917 dangling 60 feet above Broadway and Seventh Avenue (Silverman reports the cross streets as Broadway and 46th St.) from a crane being used to construct the new Times Square subway station. In return for the favor of permission, Houdini made a short speech in his support of New York's incumbent Mayor John Purroy Mitchel who was facing reelection the following day. Handbills announcing the Antilles benefit were distributed among the crowd and wives of S.A.M. members sold Thrift Stamps and War Bonds as Houdini completed his escape in 10 minutes.

The next day, The New York Tribune reported the feat:

Houdini's Antilles benefit was held on November 11 and raised $10,000. Houdini would not do another suspended straitjacket escape in New York until 1922.