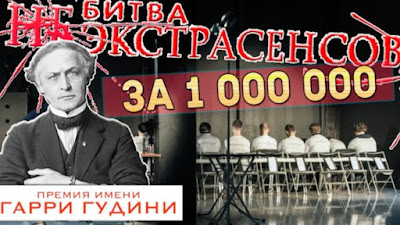 The BBC reports that a group of Russian researchers will call out TV shows about clairvoyants for promoting "fake science". The group, led by scientist Alexander Panchin and skeptic Mikhail Lidin, say they will use YouTube to show viewers why they shouldn't believe everything they see on their TV screens.

The group also administers Russia's own "Harry Houdini Prize," which regularly invites the stars of psychic shows to replicate their feats under controlled conditions for a prize of one million roubles.

Lidin says, "These programs lead to people using faith-healers and fortune-tellers, signing up for worthless or even potentially harmful psychic training courses, and handing over money to swindlers." He points to the consistently high levels of belief in the paranormal in Russia, especially since the fall of he Soviet Union.

But not all TV mediums get away with it. Yuri Oleinin, a contestant on the show "Battle of the Clairvoyants" is now serving three years in prison for defrauding 20 people via a radio call-in program.