A new paperback edition of Walter Satterthwatt's 1995 novel Escapade has been released by Ostara Publishing. This marks the book's first publication in the UK. Shame the cover art doesn't play up the Houdini connection. 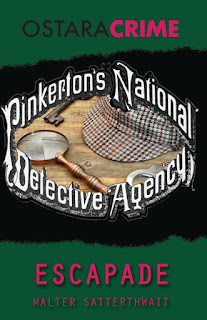 It is the summer of 1921 and the guests are arriving at the stately country house (haunted, of course) of Lord Purleigh in Devon; among them a Viennese psychoanalyst, a mysterious medium there to conduct the obligatory seances which were all the rage, Sir Arthur Conan Doyle the creator of Sherlock Holmes and the great escapologist and showman Harry Houdini. Ostensibly hired to act as Houdini’s bodyguard, following threats from a jealous fellow magician, Phil Beaumont finds himself casting a wise-cracking American eye over English high society whilst dealing with the energetic attentions of Lady Purleigh’s daughter and having to solve the murder – in a locked room – of the wheelchair bound head of the family, the Earl of Axminster. With assistants such as Conan Doyle and Harry Houdini, the case should not be difficult, though of course it is, but the one who shows the most promise could be Jane Turner…