Son of Houdini is a proposed feature film written by Barbara Glasser based on the short story "Hyman the Magnificent" from A Plague of Dreamers by Steve Stern. Here's the pitch: 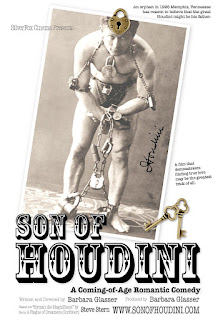 An orphan in Memphis, Tennessee has reason to believe that the great Houdini might be his father. When Houdini dies of a ruptured appendix on Halloween Eve, 1926, our hero Hyman Weiss, decides to take up the mantle of his ‘spiritual father’ and become an Escape Artist. For one reason or another, Hyman is unable to rehearse his tricks and each performance ends in disaster. Miriam, the village beauty, has feelings for the compelling Hyman, at least in part because in her he seems to be uninterested.

Guaranteed: No violence, no obscenity, no nudity, no crudity, no car chases, no ingestion of questionable substances, just one memorable kiss, initiated by Miriam. A character-driven Coming-of-Age Romantic Comedy with subtlety, charm and wit. Perfect Family Film and First-Date Movie.


Producers Silver Fox Cinema are seeking investors. That's a hard road to travel, but they've put together a very nice website. I wish them the best of luck.