The story of Bess getting stuck in the Metamorphosis trunk is one that appears in most Houdini biographies. It was also amusingly dramatized in The Great Houdinis (1976). Recently I came upon this story from the Feb. 6, 1900 Sedalia Democrat describing exactly what happened that night, right down to Bessie's outburst, "So this is the way you try and kill me, is it?" 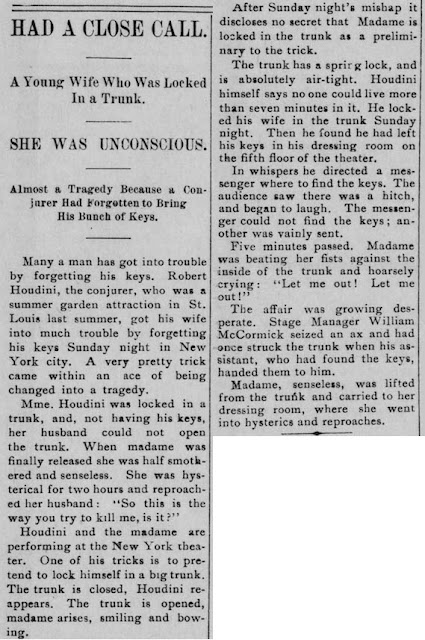 The offending trunk was almost certainly the trunk that was for many years was owned by the great Patrick Culliton. This is the trunk the Houdinis were using in 1900. It's a trunk I've had the pleasure of being put inside. I did not get stuck. 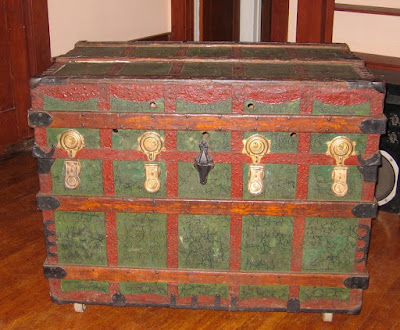 For those familiar with how the Metamorphosis works, it's a little hard to fathom how Bess could become "trapped" due to a lack of keys. Of course, to get out would have exposed the trick to the audience, so Bess might have just been a trooper and allowed herself to remain locked up. Or is it possible this was all just an attention getting publicity stunt? If so, I doubt Harry was happy when he saw the paper identified him as Robert Houdini.

Many assume this happened during the Houdinis early struggling days, as portrayed in the clip below from The Great Houdinis (the singing is a Hollywood invention). But by February 1900, Houdini had already signed with Martin Beck and had scored success on Beck's Orpheum circuit out west. He had also just appeared at Keith's flagship theater in Boston. Fortunately, this did not happen at a Keith or Orpheum theater.

This happened at The New York Theatre on Broadway between 44th and 45th Street. The theater was built by Oscar Hammerstein in 1895 as the Olympia (a precursor to his Victoria) and contained two theaters and a roof garden. Harry and Bess were performing in the 1,675-seat Music Hall which was reserved for variety acts. The New York was an independent theater and a competitor to Keith's Union Square. Maybe that's more evidence to suggest this was staged. Houdini could afford to have an "accident" like this off the Keith circuit. 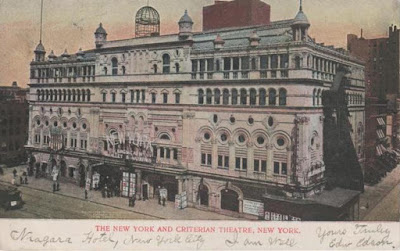 In 1915, Marcus Loew turned the New York into a "multiplex" cinema. The building stood until 1935. Today the site of Bessie's boxing is the Criterion Center Stage Right in Times Square.