When did Houdini become "King of Handcuffs"? 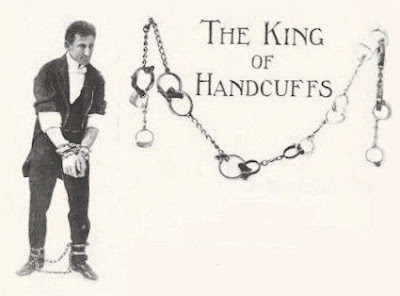 My recent post about How "The Houdinis" became "Houdini" has raised the question of exactly when Houdini adopted his famous "King of Handcuffs" moniker. Some say it was Martin Beck who came up with the name when he signed Houdini to his Oprheum circut in 1899. Bill Kalush in The Secret Life of Houdini Laid Bare states that Houdini first used the billing in Joplin, Missouri in May 1898 (actually, the book contains a typo, 1889, which is impossible as Houdini was still Ehrich Weiss in 1889).

But now Joe Notaro has found an even earlier mention in The Columbus Daily Advocate for Tuesday, December 28, 1897. This was when Harry and Bess were traveling with the California Concert Co., a medicine show headed by "Dr." Thomas Hill that played the midwest. 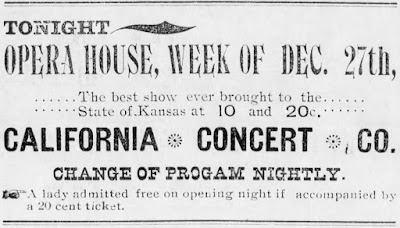 So is this the earliest use of "King of Handcuffs"? It certainly is a strong candidate. Bruce MacNab, an authority on Houdini's early career and the author of The Metamorphosis: The Apprenticeship of Harry Houdini, says that he has not come across anything earlier.

The "King of Handcuffs" billing shows up again in May 1898 when the Houdinis are performing with the Welsh Bros. Circus. After Houdini signs with Martin Beck in March 1899, it becomes almost standard. 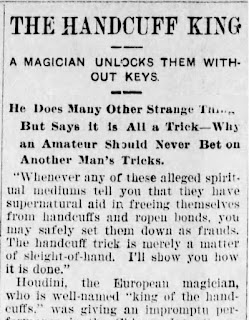 In October 1899, The Marion County Herald shortened it to "The Handcuff King" in a headline. As far as I can find, this is the first appearance of that famous variation. One wonders if this is where Houdini got the idea? (There was also a racehorse called "Handcuff King" active at this time.)

Interestingly, the same article says Houdini is also known as "the Needle King," in reference to his East Indian Needle trick. That one didn't stick.

So for the moment, it appears December 28, 1897 is indeed the earliest mention of Houdini as the "King of Handcuffs." It also proves that it was Houdini who came up with the name before Martin Beck came along and helped make it world famous.

Thanks to Joe Notaro and Bruce MacNab.