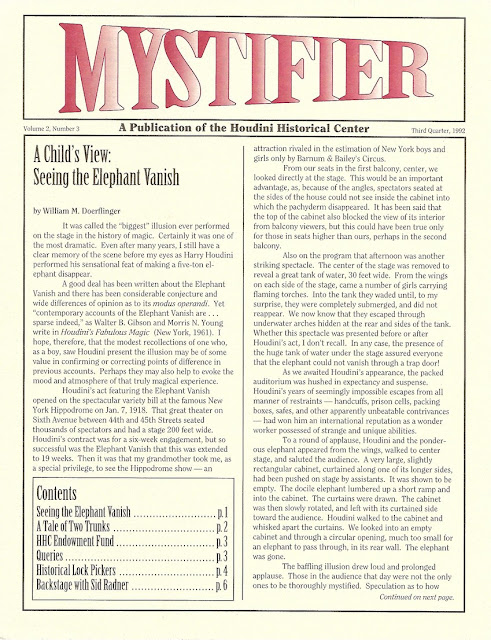 The first issue to carry the new Mystifier name was released in the Third Quarter of 1992. The newsletter kicks off with a terrific article by William M. Doerflinger who, as a boy, saw Houdini do his vanishing elephant at the New York Hippodrome. What a memory! Here's an excerpt:

To a round of applause, Houdini and the ponderous elephant appeared from the wings, walked to center stage, and saluted the audience. A very large, slightly rectangular cabinet, curtained along one of its long sides, had been pushed on stage by assistants. It was shown to be empty. The docile elephant lumbered up a short ramp and into the cabinet. The curtains were drawn. The cabinet was then slowly rotated, and left with its curtained side toward the audience. Houdini walked to the cabinet and whisked apart the curtains. We looked into an empty cabinet and through a circular opening, much too small for the elephant to pass through, in its rear wall. The elephant was gone.


The newsletter continues with "A Tale of Two Trunks" by Morris N. Young in which he examines a second trunk Houdini used to carry his escape tools. The HHC Endowment Fund is then discussed. We then get a lengthy first draft article by Houdini on "Historical Lock Pickers", edited and annotated by collector and manuscript owner Manny Weltman.

In his "Backstage" column, Sid Radner reports on the success of the recent Magic Collectors' convention in Appleton, saying, "we had the greatest every gathering of Houdini experts ever assembled one area!" He also notes that "six or more books by convention attendees are in the works, the first of which, by Pat Culliton, had a September publication date." That book was Houdini's Strange Tales.

The newsletter concludes with news of new postcards in the museum shop.