Reagan in the seance room

Last month I reported on a recent Houdini seance at the Magic Castle attended by Bobby Kennedy Jr. In the interest of non-partisanship, here's one from the other side of the political aisle.


In the latest Magic Castle newsletter, medium Leo Kostka writes about the evening of November 26, 1991, when former President Ronald Reagan and First Lady Nancy Reagan attended a Houdini Seance with friends. Leo says there were eight Secret Service men keeping watch over the room, four on each door. He says he was pretty nervous and "investigated every working part of the seance room in preparation so that nothing would go wrong."

It still amazes me to think that the Secret Service would allow the lights to be fully extinguished and objects to unexpectedly fly about the room, but I'm assuming The Gipper got the full treatment!

By the way, how awesome is it that Reagan is wearing a Houdini Seance button on his jacket in the above pic? Guess he couldn't get into the room if he wasn't! Be cool to think that his Secret Service detail were also all sporting these. Reagan's button is the old style, which looked like this: 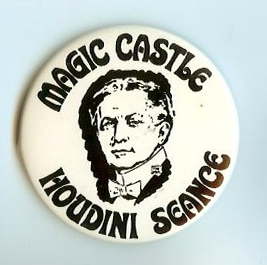 President Obama and Michelle...you're up!
Written by John Cox at 9:55 AM