Houdini a no show, but 2018 seances still a success

Houdini once again decided to skip the seances held in his honor last night. But if the true goal was to celebrate his life and entertain, then this 92nd anniversary was a great success!

Despite the best efforts of Psychic Medium Maggie Salter, Houdini did not come through. The seance was live tweeted by JMM Marketing Manager Rachel Kassman, who has posted a full account of the event at the JMM Blog.


Meanwhile, in New York City, Dorothy Dietrich and Dick Brookz held their "Original Houdini Seance" at Sojourn Restaurant, the site of the Weiss family's first New York home. Guests of honor were author Alain Nu and artist Cynthia von Buhler. Dick reported that cellphones rang twice when Houdini was called upon, and the restaurant chandelier noticeably swayed. You can read a report at the Daily News.

Congrats to all the organizers and participants. Let's try again next year! 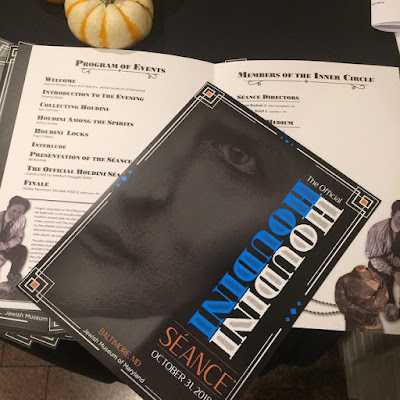 UPDATE: Check out Joe Notaro's report on the Official Seance at HHCE.