In 2016 collector Thomas Ewing shared with us the only known photo from Hardeen's 1937 Vitaphone short, Medium Well Done. Now Tom is back with a new image that's even more exciting! 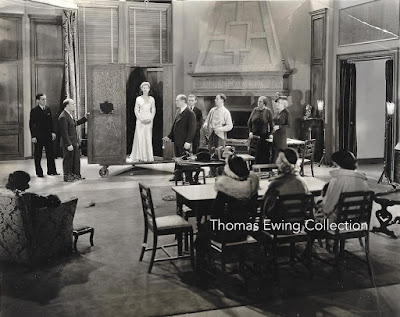 This photo shows Hardeen giving spiritualist demonstrations before members of the cast, including Gertrude Mudge, Margaret Breen, and Paul E. Burns. Of note is what appears to be a large spirit cabinet. What's interesting is we know Harry Kellar gave Houdini his spirit cabinet in 1917. Presumably, Hardeen inherited it along with Houdini's other apparatus. So are we seeing Kellar's own spirit cabinet being performed here? Also, is that Jim Collins holding the door?

Medium Well Done features Hardeen as a detective exposing the tricks of a bogus medium. It was shot at the Brooklyn Vitaphone Studios in January 1936 and released March 6, 1937. At the moment, it is considered a lost film. But the good folks at The Vitaphone Project have made it their mission to find lost Vitaphone shorts, so here's hoping one day they might uncover this important piece of movie and magic history.

Thanks to Tom Ewing for letting me share this treasure here.

UPDATE: According to Ron Hutchinson at The Vitaphone Project Facebook group, Medium Well Done is NOT lost. He says it "exists in 35mm at Library of Congress." This is great news, and it gives me hope we might one day see it released via the Warner Archive Collection.