"Howlin' from the Houdini Hole" in Austin, Jan. 19 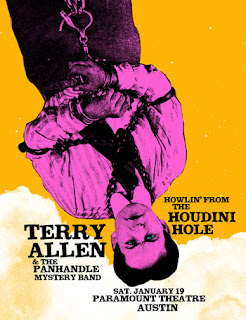 Terry Allen and The Panhandle Mystery Band will be performing a concert at Austin's Paramount Theater on January 19 at 8pm. The name of the concert is "Howlin' from the Houdini Hole." This is a reference to the fact that the Paramount was once the Majestic Theater where Houdini performed on several occasions. There's even a hole in the proscenium said to have put there by the great escapist.

I don't believe the concert has anything to do with Houdini apart from the name and a pretty cool poster (right). But, hey, that's enough!

You can buy tickets and get more information via the Paramount Theater website.