Minerva vs. Houdini in new play

A new play about real-life escape artist Minerva and her rivalry with Houdini will have its World Premiere at Theatre Network in Edmonton, January 17-27. Previews begin January 15. 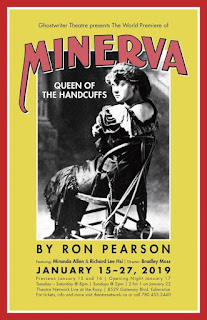 No binds can hold her! No box can contain her! She can escape from anything… anything but the clutches of the master himself! Minerva – Queen of the Handcuffs is the true story of the world’s most famous female escape artist and her rivalry with Harry Houdini. This world premiere production features Edmonton’s own master escape artist, Miranda Allen.


Author Ron Pearson shared some details about the play at Dean Carnegie's Magic Detective. Ron says, "I very much liked the idea of portraying Houdini as the bad guy, as he is traditionally seen as the archetypal hero. It gave me the opportunity to cast him as the symbol for all of the barriers and inequality that women had to endure at the turn of the twentieth century, particularly female performers."

UPDATE: Check out this review of the real Minerva I just found in an April 1907 issue of Variety. I've not heard that "former assistant" claim before. 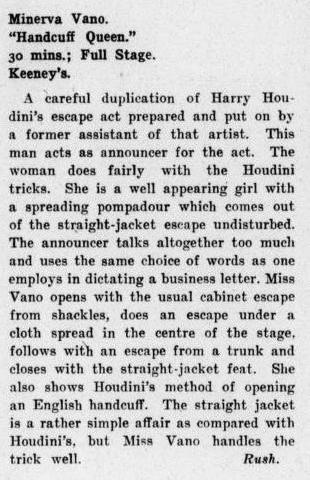