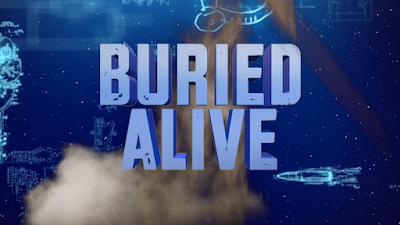 Houdini's Last Secrets goes out on a positive note with an investigation of Buried Alive. This was a good choice of subject for the final episode. Apart from two posters, very little is known about this feat, so it was not only interesting to see how Houdini might have accomplished the escape, but it was interesting just to see how he might have presented it in the first place!

One can easily get buried in the history of Buried Alive as there were multiple versions. The show does a nice job of separating Houdini ill-fated outside buried alive stunt and his later stage-bound version. (They avoid the Shelton Pool Test.) The episode sticks with the conventional wisdom that Houdini never performed his stage-bound version. But in recent years, evidence has surfaced that shows he actually did perform it at least twice at the start of his 1926-27 season.

Interviews are again a highlight. This time George Hardeen visits Antony Britton in England, who attempted the outdoor casket-free buried alive and, like Houdini, nearly died. Roger Dryer shows us his magnificent Houdini Museum of New York which holds a casket Houdini escaped from in 1907 (unburied). It's a treat to see David Merlini and his own House of Houdini museum in Budapest, Hungary. I don't believe David has appeared in a Houdini documentary before, but his knowledge of Houdini history and his first hand experience with escapes--including being buried alive--make him an ideal interview subject. Finally, we get to see the mighty Arthur Moses in his own temple of Houdiniana in Fort Worth. Arthur handles his Houdini history with great authority.
In fact, this episode is probably the best yet as far as Houdini history is concerned, expanding it with mentions of his movie career and crusade against fraudulent spirit mediums. The idea that George is uncovering the story of his great uncle for himself and the audience is best realized in this episode. Of course, it wouldn't be "reality" TV without talk of a murder conspiracy! But the episode doesn't go too deeply into this and is not significantly derailed by it.

But the meat of the episode is the Buried Alive itself. Steve Wolf at Stunt Ranch constructs a theoretical version of Houdini's stage apparatus for magician Lee Terbosic to attempt. Both the conception and method is ingenious, and because we don't even know exactly how Houdini presented it, there's no danger of exposure. But in bringing the escape to life, one can appreciate how it was an effective stunt, and maybe even a lost Houdini masterpiece. So the episode has provided a real service to Houdini history by showing us what may have been. 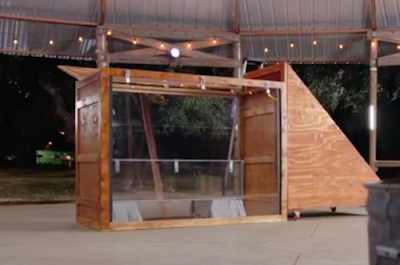 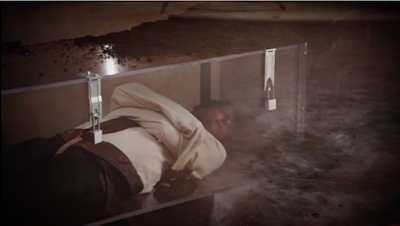 Overall, this series turned out to be a mixed bag. It contained a disappointing amount of speculative hokum about Houdini being a spy at the expense of a more fact based exploration of his life. But the team's investigations and recreations of Houdini's feats were all very well done, and the series provided great interviews with fresh faces. And above all, it was respectful to Houdini and made him ever more fascinating!

It also did not turn out to be an exposure show as many had feared. They did indeed successfully ride the line between exposure and investigation, and in the case of a few genuine secrets, such as the Water Torture Cell, they went out of their way to protect the real method. So I'd say this series was a cut above and a worthy addition to the growing list of Houdini documentaries. I would be happy to see a second season.

The complete Season One of Houdini's Last Secrets is available for purchase at Amazon and iTunes.

If you're interested in more information on Buried Alive, check out the below links:


Buried Alive
Digging into Houdini's Buried Alive
Ad shows Houdini performed Buried Alive in 1926
Houdini on being Buried Alive: "I like it very much."
Houdini's Last Secrets - Episode Guide
Written by John Cox at 6:51 AM