Prince Ea on Houdini and the prison of the mind

Here's a well done motivational meme by spoken word artist Prince Ea that uses Houdini as a way to illustrate the hazard of "overthinking" a situation. In the clip reenactments, Houdini is played by Andrew Morrison.

Ea adds some embellishments, such as locating this in the South and saying a condition of Houdini's jail breaks was that he had be dressed in his street clothes. But that is not correct. Houdini would famously allow himself to be strip searched and do his jail escapes in the nude, as he would have been here.

So did this really happen? That's not clear. This is a story Houdini would tell himself, but he located it in the UK, not the American south. He also sometimes changed the context to a safe instead of a jail cell. So, like Ea, it appears Houdini might have used the story of the lock that was never locked as a parable. I do like how the video subtly implies that the jailer purposely left the door unlocked, perhaps to deliver the boastful Houdini this important life lesson.

As to the message itself... In general, I'm not a fan of motivation speaking and its tendency to eschew practical advice in favor of magical thinking. The fact is 99% of the doors Houdini encountered were locked, and he opened those with hard work and study. "My brain is the key that sets me free," he was fond of saying.

However, as I watched this, I remembered a clipping from the April 11, 1924 Asbury Park Press, which suggests Houdini did share a belief in the power of thought, so... 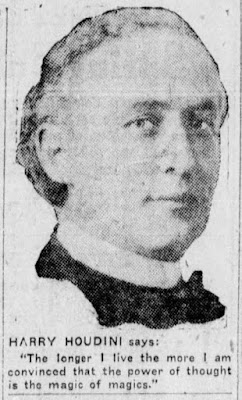 Below are a few more links to Houdini-themed motivational works.