I thought it right to do these books as a set. I call these the Fantastic Four. That's because these four picture-packed Houdini "coffee table" books were all released in 1976-77. What makes this more remarkable is there has never been a Houdini coffee table book before or since. Maybe it was the 50th Anniversary of Houdini's death that inspired publishers to step up and release these books, or maybe it was the new wave of interest in magic brought on by Doug Henning's first television special. But I can't complain, especially as these books all rolled out during the very first year of my interest in Houdini. I got the message, Universe. 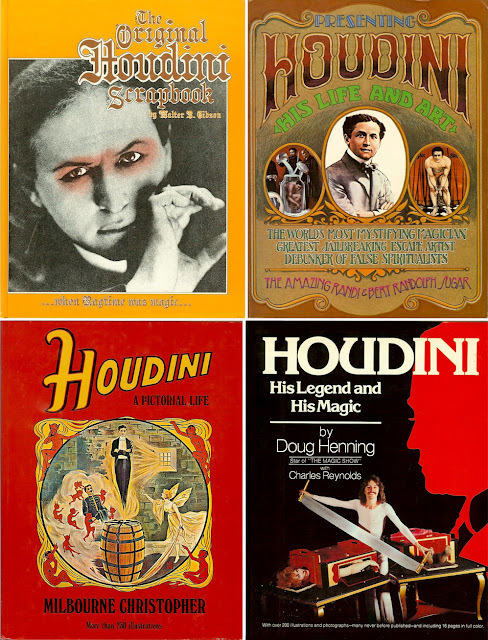 The first of the Fantastic Four was The Original Houdini Scrapbook by Walter B. Gibson. This was actually the first new (adult) Houdini book published since Milbourne Christopher's Houdini The Untold Story in 1969. Like Gibson's other work, the book is largely a compilation of already published material. Gems include Houdini's entire Magic Made Easy catalog/pitchbook and some rare letters and documents, including two famously revealing letters Houdini wrote to Hardeen after the death of their mother. Gibson also provides a wonderful introduction in which he recalls meeting Houdini for the first time at 278.

The Original Houdini Scrapbook was first published in paperback in 1976 by Corwin Sterling. A hardcover was released the following year. The cover features the tagline, "when Ragtime was magic," no doubt playing on the success of E.L. Doctrow's bestseller, Ragtime.

The next book to appear was Houdini His Life And Art by Bert Randolph Sugar and James "The Amazing" Randi. This is an under appreciated book, in my opinion. While the pictures are spectacular, the text is equally strong. One doesn't think of James Randi as ever having penned a Houdini biography; but he did and it's here and it's darn good. Houdini His Life and Art was published first in paperback in 1976 by Grosset & Dunlap and a year later as a hardcover.

Houdini A Pictorial Life by Milbourne Christopher appeared in hardcover in 1976 from Thomas Y. Crowell Co. This was Christopher's final Houdini book. It contains a wonderful collection of unpublished photos and a few color pages as well.

Unlike the other Fantastic Four, Houdini A Pictorial Life was never released in paperback. However, it is the only one that was later reprinted. The first was by Gramercy Books in 1998. The Gramcery edition sports nice new dust-jacket artwork, but the photo quality is very dark. It also omits the color pages. In 2010 a "Collector's Edition" was released by 1878 Press. This edition improves on the photo quality and restores the color pages. There's also a new section of material from the Christopher Collection along with a new introduction by David Haversat. 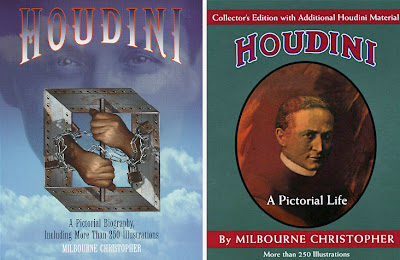 Last (but certainly not least) of the Fantastic Four was Houdini His Legend and His Magic by Doug Henning and Charles Reynolds. The popularity of Doug Henning is clear from the cover, which features a photo of Henning instead of Houdini.

Houdini His Legend and His Magic might be the overall best of the Fantastic Four. It's certainly one of the best Houdini books for photos ever published. Henning had received a wealth of rare material from Houdini's niece, Ruth Kavanaugh, which he generously shares in this book. Whole pages from Houdini's first diary, early scrapbooks, and Bess's personal photo album are all reproduced here. To this day I still marvel at how much this book offers the Houdini enthusiast. When I received this as a gift for Christmas 1977, I was so excited I threw up.

Houdini His Legend and His Magic was released first as a hardcover by Time Books in 1977 and then in paperback by Warner Books in October 1978.


I think we're about due for a new Houdini coffee table book, don't you think? Heck, why not make it four!