Houdini and The Doctor meet again! 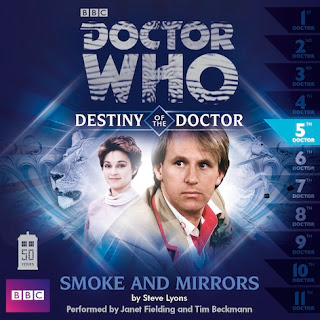 While Houdini has been name-checked several times on the BBC series, Doctor Who (celebrating its 50th Anniversary this year), it has always surprised me that the Time Lord and the Handcuff King have never been directly teamed-up in any TV, book, or audio adventure.

Happily, this changed back in December with an online short story posted on the official Doctor Who website called, Houdini and The Space Cuckoos. But now we have an even more substantial Who-dini mash-up with Destiny of the Doctor 5: Smoke and Mirrors.

This is the fifth part of an exclusive audio series produced by Big Fish and AudioGo. Written by Steve Lyons and performed by Janet Fielding and Tim Beckmann, Smoke and Mirrors features The 5th Doctor, as played by Peter Davison, and his companions Tegan, Nyssa and Adric. Here's the official plot description:

The Doctor answers a psionic distress call sent from England in the 1920s. There, in the environs of a fairground, he is reunited with an old friend: Harry Houdini. To Adric and Nyssa the name means very little, but to the Doctor's companion Tegan he is a legend. Escape artist extraordinaire, Houdini's reputation will last for decades. But how does Houdini know so much about Tegan herself? Is it really just guesswork, as he says? Is Houdini right to be concerned about the fairground's fortune teller, who claims to have supernatural skills? Both he and the Doctor suspect an alien influence may be at work. What neither the Doctor nor his friends realise is that, somewhere in the shadows, a sinister and all too familiar presence is lying in wait for them...


Destiny of the Doctors 5: Smoke and Mirrors is available now in the UK from Amazon.co.uk. It will be released in the U.S. on June 11 and can be pre-ordered on Amazon.com.

So now we have a Who-dini adventure in print and audio. Could a TV appearance be far off?

Only a Time Lord can tell.

For a complete list of Doctor Who-Houdini references check out TardisWikia.
Written by John Cox at 10:36 AM